Fun for Fall…And Fall for Fun

Alright, my post title is a little cheesy. Here’s the deal…it sounded to me like something a ring master would holler out from outside his tent at the circus “All for one and one for all!”…or maybe that was the three musketeers, or some other fanciful characters…nonetheless, I felt like we were at the circus all morning.

I say that in the nicest way…really.


I feel like we’re at the circus a lot lately, actually…life with children can tend to ebb and flow that way; constant organized chaos with some bright lights, and loud music and fun thrown in the mix. Throw in some sort of excursion (even the mall and library can be an excursion, but we’re talking a little larger than that today) and you have yourself a full blown, mind numbing, adult onset ADD inducing, kind of experience.


Our excursion today was a very “fallish” excursion…there is a chill in the air here in Buffalo this week, the girls wore winter hats to play outside after dinner last night, our hands were cold and the temperature today was in the mid to upper 40’s. Brrrr….


Because I won’t be home next weekend I decided we should do a farm/outdoor type trip today…we settled on The Great Pumpkin Farm in Clarence, N.Y….a place that has become synonymous with fall here and that many families try to visit at least once during the month of October. The “farm” boasts massive numbers of pumpkins piled high and tiered on wooden platforms, along with animals, hay rides, a bakery, face painting, crafts, pie eating contests, haunted houses (which we stay away from!), and carnival rides, among other events.


The farm also boasts massive numbers of parents and children, especially on the weekends. Yes, it’s one of those places that you might avoid at all costs before having children and that you cannot avoid at all cost after you have them. (And that ends up being costly for your pocketbook once you pay the price for those stinkin’ traveling carnival rides…grrrr.) 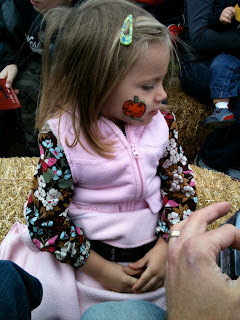 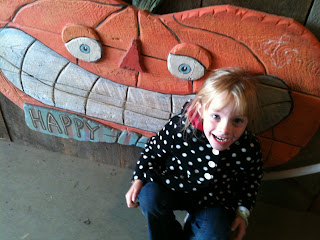 It’s one of those places, as I said to Scott as we were pulling away, “that was fun… in a nutty, my head hurts sort of way and I’m REALLY glad we have pictures and video because a year from now I will say, ‘awww, that was great’, even if I’m not thinkin’ that right now.”


It’s kind of like having a baby…if someone asked you an hour afterwards if you want to have another baby…well, my answer is usually “NO WAY”…but a year or two later, you kind of forget the hard parts and agree to trying again.


Does anyone else feel this way about excursions with kids?


It’s kind of a love/hate sort of thing if we’re really honest, right?


So, the funniest part of the entire day was not really our visit to the pumpkin farm…we did the obligatory rides and slides and crafts, ate some nachos and used porta potties. We even fed a Camel and then watched as another couple with a young child tried to feed him and instead of eating the animal food from his hand, the camel reached down and used his big mouth and long tongue to grab the ENTIRE dixie cup of food, cup and all, out of this guys hand. It was kind of funny, actually…


However, after two hours at pumpkin farm with 3 adults and 4 small children (my sister joined us with her boys, her husband had to work today), the adults had that “I’m hungry.I’m done. My brain is about to burst.  Get me out of here” look on our faces, so we piled everyone into the cars and drove to a local restaurant where one of my younger brothers works, for lunch.


The restaurant was very, very busy…apparently a lot of other families out having fall fun had the same idea about not wanting to take the chaos home to their tables, but to take their kids home fed so that they could simply fall into their beds (like we did) and have family nap hour!!!


We sat down at our table and waited for our waitress…because the restaurant was so busy nothing was happening quickly.


We  put in an order of spaghetti and meatballs and apple juice for the kids right away…and then while we waited over the next 20 minutes, each of the kids requested to use the bathroom, all at different times…Ella twice…they colored on the table paper, shrieked, whined about being hungry, demanded to know when the food was coming and eventually fought over who was going to pray…which prompted momentary tears.


We, the big people, were just making it through…wishing for a nanny or some sort of magical fairy godmother sort of help. Once the kid’s spaghetti came and the three adults systematically cut up noodles and meatballs into little pieces, buttered bread, offered napkins and finally sat down to enjoy the 180 seconds of quiet before another request emerged, Scott, my husband decided he was really, REALLY hungry…


You will NEVER believe what he did…it’s actually what inspired this entire post.


The table of three adults next to us got up after finishing their meal and left a third of a tray of uneaten pizza on their table…My hungry husband got up, walked over to that table, took a slice of pizza off of that tray and started to eat it!!!


It reminded me a little bit of that camel eating the paper cup…kind of non-tradational, non-conformist, but “hey, why not? I’m hungry!”


I still can’t get over it.


I immediately got my i-phone out to take a picture….


Scott was so outnumbered because then my sister chimed in and agreed that it needed to be blogged about.


Shortly after the pilfered pizza, we looked across the table and saw the youngest of the 4 children with this face….


The painted animal (spider?) that had been on his hand suddenly found itself smeared all over his face…. 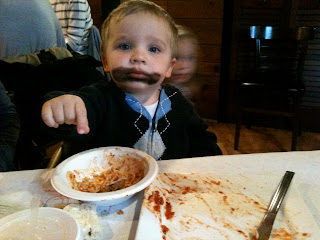 And eventually, we adults were all so tired that you would have thought we had just won the lottery when Scott proposed bringing in the portable DVD player from the car so that the kids could watch Dora (because they were ALL finished eating and our food had not even arrived!).


“Should I grab the DVD player?” he asks.


Dora was as magical as any fairy godmother at that moment.


Scott got the DVD player, the kids found a bowl of lollipops and we ate our meal in peace.


It’s quite astounding how much less annoying Dora’s voice becomes when the alternative is hear the consecutive demands, questions and exhortations of 4 preschool aged children. 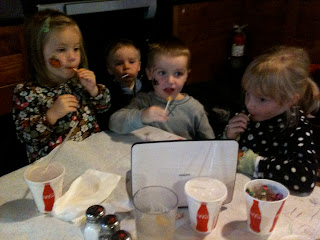 We were SOOOO that family….


…You know the people you are NEVER going to be once you have kids!! In your pre-parenting mind that is.


We made it home, we napped, we’re recovering…


I do NOT want to go back to pumpkin farm…


Not next week anyways…


Ask me 355 days from now and it will likely be a different story.


I’ll just be sure to pack the DVD player in the car.

Praying for your children

You’re Going Where? For What? With Whom?!

To Dance and Sing

The Top 10 Reasons I Love My Husband, Part 1

Reflections on Christmas, Part 2: Are You Making Room?

Better Lovin’ in the Day to Day

A Chord of Three Strands…